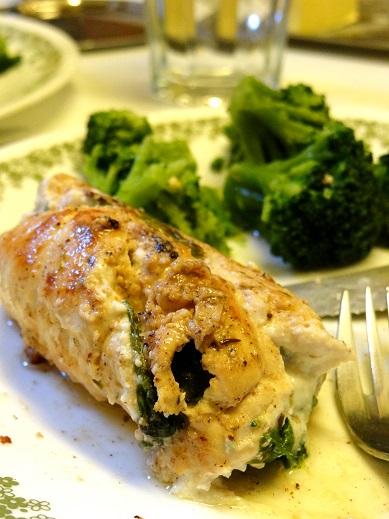 I believe some of the best things in life start with an idea shared during a good meal.

When I was in Greece, earlier this month, I had dinner with two of my cousins. During dinner, my sister mentioned I had opened my blog a few days earlier. That is when my cousin Julia’s husband, Nikos, told us he had worked in a restaurant and had occasionally taken over the kitchen. He also shared a « rough draft » of a recipe he used to make: feta-stuffed chicken. The basic idea was to mix feta with some dill, and any other herb you fancy, and then push the mix under the skin of the chicken before baking it in the oven.

But like I said, it was a « rough draft. » Because of how the conversation went, I didn’t get any more details, and my sister and I still debate whether Nikos was using the entire chicken or just chicken thighs.

The lack of details left the door wide open to interpretation and imagination. I don’t really know how I came up with the idea of a ballotine-style, pan-seared chicken breast, but I’m not too dissatisfied with the results.

As usual, feel free to switch things up and don’t hesitate to let me know in the comments 🙂

In a bowl, mix the feta, ricotta, thyme, lemon juice and olive oil with a fork. Add salt and pepper to taste, and set aside.

On a chopping board, put one chicken breast between 2 sheets of Clingfilm, and flatten it with the flat side of a meat tenderizer. You want your chicken breast to be even in thickness all over so the cooking will be more uniform.

Remove the top sheet of Clingfilm and spread half the cheese mix on top.

Cover with a few baby spinach leaves and roll as tightly as possible, using the bottom piece of film if needed. Secure with toothpicks or tie it with string.

Repeat with the second breast.

Melt the butter and olive oil in a frying pan over high heat. When sizzling hot, add your chicken. Cook, turning often, until golden on all sides.

Remove the chicken and deglaze your pan with the liquid of your choice (I chose lemon juice), scraping all the bits.

Save this on Delicious